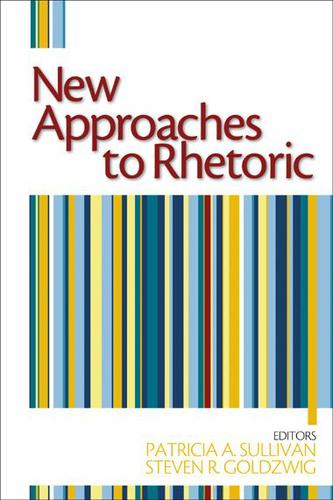 New Approaches to Rhetoric provides fresh perspectives on the study of rhetoric and its ability to affect change in today′s society.  Although traditional approaches (e.g., neo-Aristotelian) to the study of rhetoric have utility for the twenty-first century, communication in a complex, mass-mediated postmodern age calls for new critical approaches. The contributors of this volume, including James Darsey, Kathryn M. Olson and G. Thomas Goodnight, George Cheney, Dana Cloud, and Barry Brummett, explore possibilities for bridging rhetorical studies of the past with rhetorical studies of the future. The original essays invite students to join rhetorical theorists and critics in an ongoing dialogue concerning what it means to study communication in a postmodern world.

Divided into three Parts, New Approaches to Rhetoric challenges and expands the definitions, approaches, and assumptions governing rhetorical scholarship. Part I, Rhetorics, Ethics, and Values, addresses, in different ways, a central question for the study of rhetoric today: How, and under what conditions, will moral arguments be articulated in the 21st century? Part II, Rhetoric, Institutions, and Contexts, features real-life case studies, showing students the function of rhetoric in today′s world. Part III, Rhetorics, Cultures, and Ideologies, encourages students to examine ideological approaches to criticism and issues associated with class, race, and gender.

Features of this volume:

Original, never-before-published pieces by leading rhetorical theorists and critics including James Darsey, Kathryn Olson and G. Thomas Goodnight, George Cheney, Dana Cloud and Marouf Hasian, and John M. Murphy and Thomas R. Burkholder, among others
Each part opens with a brief introduction to frame discussion for students.
Topics and case studies will appeal to students and scholars (e.g., film, Disney, political keynote addresses, autobiography, labor union discourse).
Barry Brummett′s Conclusion speculates on what the collection suggests about rhetoric in the 21st century and offers ideas to guide students as they contemplate the future of rhetorical studies.

New Approaches to Rhetoric is ideal for upper-level undergraduate and graduate courses in Rhetoric and in Political Communication in departments of Communication, English, and Political Science. This book is suitable for use as either a primary or supplemental course text and will be invaluable as a general reference for scholars of rhetoric, social movements, and public sphere studies.