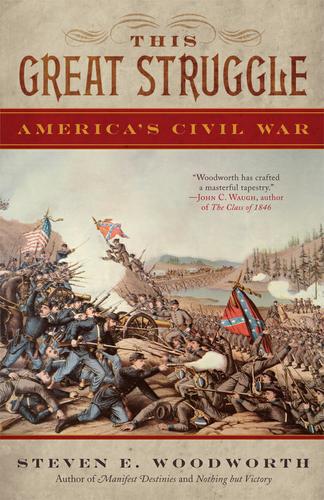 Referring to the war that was raging across parts of the American landscape, Abraham Lincoln told Congress in 1862, "We shall nobly save, or meanly lose, the last best hope on earth." Lincoln recognized what was at stake in the American Civil War: not only freedom for 3.5 million slaves but also survival of self-government in the last place on earth where it could have the opportunity of developing freely.

Noted historian Steven E. Woodworth tells the story of what many regard as the defining event in United States history. While covering all theaters of war, he emphasizes the importance of action in the region between the Appalachians and the Mississippi River in determining its outcome. Woodworth argues that the Civil War had a distinct purpose that was understood by most of its participants: it was primarily a conflict over the issue of slavery. The soldiers who filled the ranks of the armies on both sides knew what they were fighting for. The outcome of the war—after its beginnings at Fort Sumter to the Confederate surrender four years later—was the result of the actions and decisions made by those soldiers and millions of other Americans. Written in clear and compelling fashion, This Great Struggle is their story—and ours.